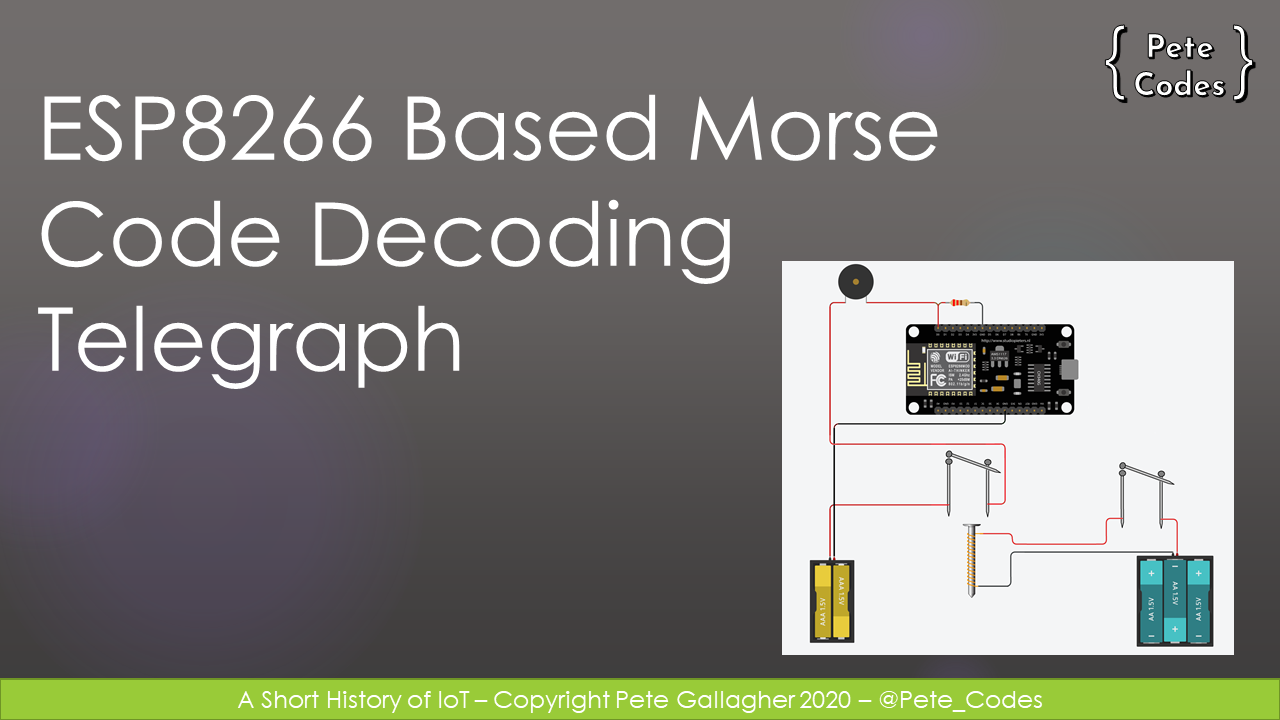 In my recent talk – A Short History of IoT – I discussed the various inventions, back in time, that led us to where we are with modern IoT.

I began with the Electric Telegraph as I believe it to be the first IoT Device. I explained some of the scientific discoveries which led to the invention of the Telegraph in a previous post.

To close out the talk, I finished with a show-stopper demo of a recreated Electronic Telegraph that I’d connected to an ESP8266 which would trigger a tweet to be sent with the decoded Morse Code Message.

This post details how I connected the ESP8266 to the Telegraph. In the next post I’ll dig in to how I then hooked the whole thing up to Azure and had it tweet out a message.

As part of the talk I created a Samuel Morse style Electric Telegraph;

This was a relatively straightforward build, in that there were only a few components;

Bringing the Telegraph into the 21st Century

As I was giving an IoT Talk, I wanted to bring the telegraph right up date. So, I decided to hook the Telegraph up to an ESP8266 so that I could decode the Morse Code Signals and squirt them out to the Terminal.

I modified my circuit to add the ESP8266;

Here I’ve connected the positive end of the 3v Battery Pack through the Nail Receiver, onward through a Piezo Sounder and to the ESP8266 on input D0. I’ve pulled the input down to ground through a 220 Ohm resistor, as the circuit will pull the input up to a high value when activated.

The other side of the circuit is connected out through the GND pin the ESP8266 and back to the Battery pack’s negative terminal.

Before you can get started with the ESP8266, you need to add the board to the Arduino IDE.

Once the Preferences Dialog is open, click on the Additional Board Manager URLs window button;

Add the following line to the Additional Board Manager URLs;

Next up, you can choose the “Generic ESP8266” option from the list of boards;

Finally, choose the correct COM port for your ESP8266;

I did some searching around and found a nice starting guide over on Instructables by Pinaki_91; https://www.instructables.com/id/Morse-Code-Decoder/

It needed some tidying up… It wasn’t working too well for the ESP8266, as it kept resetting the watchdog. It also didn’t have any decoding for numbers, so I fixed that up and I was good to go;

The basic operation is as follows;

You can see the code right here in the GitHub repository;