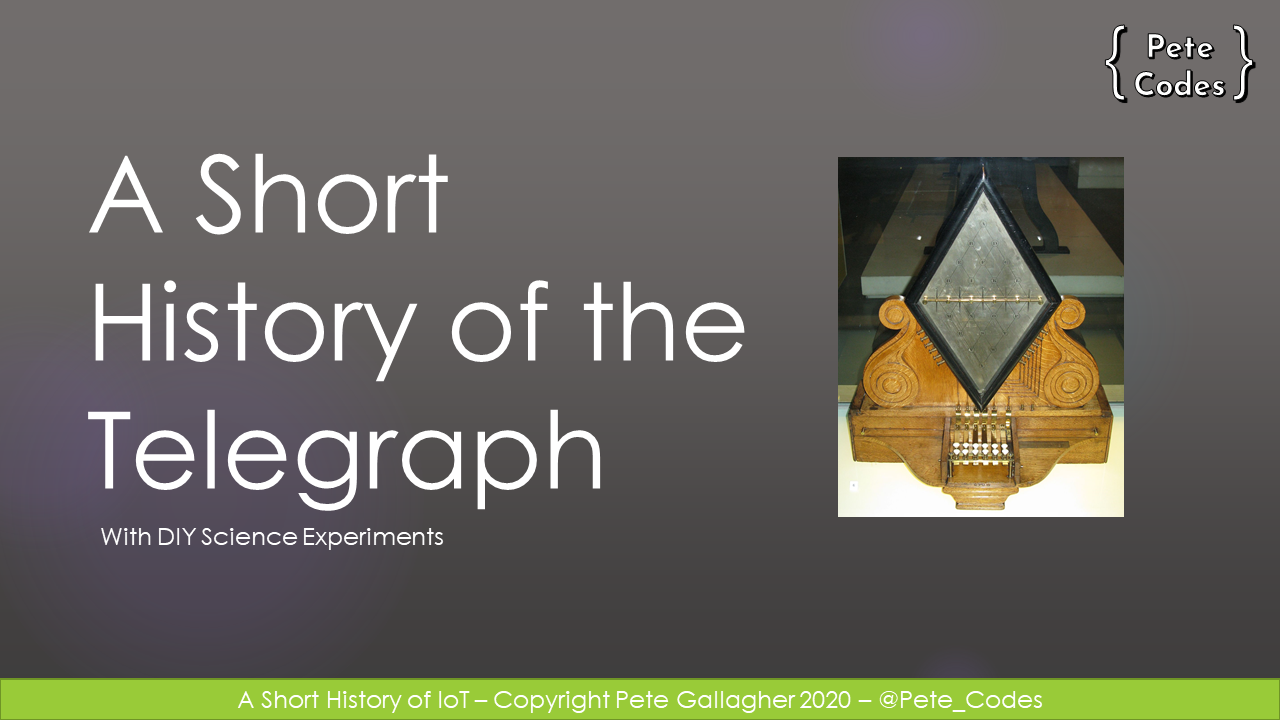 In my recent talk – A Short History of IoT – I discussed the various inventions, back in time, that led us to where we are with modern IoT.

The Telegraph – The First IoT Device?

I begin with the Telegraph, which in my opinion is the first IoT Device. Cooke and Wheatstone created the first commercial telegraph in 1837.

Less than a century after its invention, there were cables encircling the globe able to carry messages in minutes rather than months.

This was the dawn of an age where information became ubiquitous, common people could sent messages across the globe at a whim, and the world shrunk as a result.

While researching the talk, I became fascinated with how understandable the underlying concepts were, and that you could in essence, recreate the same discoveries at home using components that I had around the house.

It’s amazing to think back to that time and how much was to be discovered in that century, a lot of which required nothing more than a battery, some wire, a compass and some water.

The first example I had a go at was Samuel Von Sömmering‘s Telegraph from 1809. This was the first electric Telegraph that could send messages over a long distance (several kilometres in this case).

The theory of operation was that, by passing a current through an electrolyte (a liquid or gel which contains ions and can be decomposed by electrolysis), then that liquid is split down into separated gases.

In Sömmering’s Telegraph he attached 35 wires from a battery at one end to a receiving station where each wire was immersed in a vat of acid. When the circuit was completed then hydrogen bubbles would be produced at the end of the activated wire, indicating the letter to be received.

This can be recreated at home quite easily with just a 9v battery, two croc clip leads, some graphite from a pencil and some salt water;

Obviously it’s worth bearing in mind that not only Hydrogen is produced here, as we’re using salt water, you will also be producing a small amount of Chlorine Gas. Also, if you submerge the croc clips and the graphite, you’ll also deposit other chemicals into the water, making an alkaline, so dispose of the water carefully.

This was really cool to replicate Sömmering’s work from over 200 years ago in my office.

Hans Christian Ørsted and the Compass

The next evolution of the Telegraph came after Hans Christian Ørsted passed current through a wire next to a compass needle and saw the needle deflect.

What Ørsted had discovered was electromagnetism produced by a current flowing through a conductor.

I found a fantastic company that supplies schools with science equipment; https://www.philipharris.co.uk/

They have a great range of equipment in stock at really great prices with free delivery available.

I ordered some plotting compasses, which were all of 46p each, along with a soft iron rod and some Iron Filings and the whole order came to less than a tenner.

Once I’d received the compasses I was able to reproduce Ørsted’s work easily;

What we can see here, when the circuit is made, the compass needle is deflected. If the probes are switched, with the current flowing in the opposite direction, the needle deflects the other way.

William Sturgeon and the Electromagnet

Hot on the heals of Ørsted was William Sturgeon who’d discovered that using multiple turns of wire around an iron core could create a electromagnet.

The invention of the electromagnet would herald in the true start of the telegraph age, with long distance communication now within reach. The electromagnet could effect mechanical motion at great distance almost instantaneously.

Once again, an electromagnet is a relatively easy diy make at home. Simply wrap insulated wire around a core… A steel bolt will do. If you’re lucky enough to have some magnet wire (enamelled copper wire), then this will work even better as it allows you to have more turns in a smaller space. I’d also bought a Soft Iron Bar from Philip Harris, which itself works better than a steel bolt too as it doesn’t become magnetised as easily;

Samuel Morse, his Telegraph and Code

Further more, there was also a limit on the distance that the sender and receiver could be at, after which the signal strength would be so weak that it couldn’t be received reliably.

Morse, with the help of Leonard Gale, solved these problems first by reducing the number of wires down to just one and also by employing repeater relays along the line to boost the signal between locations.

One of the reasons why Cooke and Wheatstone had chosen to use 5 needles, was so that the operators didn’t need to be trained in encoding and decoding of messages.

However, Morse created a code based on a system of dots and dashes that would later take on his name. This drastically reduced the costs and maintenance involved in the telegraph and would fast become the standard for Telegraph Communications, and later radio of course.

The circuit for the telegraph was relatively straight forward;

The sending side to the right is activated when the horizontal nail makes the connection to the left hand nail. This in turn activates the electromagnet made from a steel bolt and some magnet wire.

Of course… I was giving a talk about IoT… So, I decided to bring the historic Telegraph right up to date and connenct it to an ESP8266.

In a future blog post, I will be describing the process in detail.